The University of Tasmania is nationally and internationally recognised for its research on eucalypt genetics and ranks as the top institution world-wide in terms of total published journal articles in its field (Scopus). Eucalypts are a focus of our research as they are of great ecological and economic significance, and are Australia’s major plant germplasm contribution to the world. The eucalypt forests on the island of Tasmania provide an amazing natural laboratory which we enjoy exploring (see our species) (see our photo gallery). 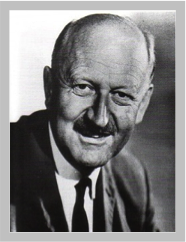 UTAS has a long history of research in eucalypt genetics. Newton Barber initiated this field of research through his studies of clines (e.g. Barber 1955. Evolution 9:1-14). This research was continued by his student Bill Jackson (e.g. Barber & Jackson. 1957. Nature 179:1267-69). A student of Bill Jackson, Jim Reid trained many eucalypt geneticists including Brad Potts (e.g. Potts & Reid. 1988. Evolution 42: 1245-55).   In the 1990s, research in eucalypt genetic expanded greatly when Jim Reid and Brad Potts played a key role in attracting funding for a Cooperative Research Centres (the CRC for Temperate Hardwood Forestry, 1991-1997). This funding allowed recruitment of René Vaillancourt in 1992 and Dorothy Steane in 1995. 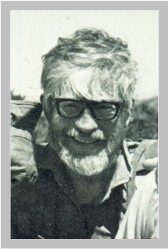 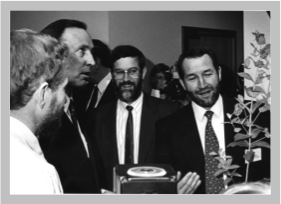 Opening of the first Forestry CRC by the Prime Minister, Hon Paul Keating, 1991